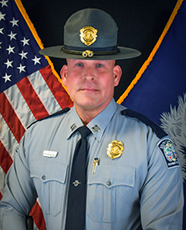 Capt. McMurry began his career with the Highway Patrol in 1996 in Berkeley County and has served as the Telecommunications Lieutenant for more than three years.